Kostas Sotiropoulos was born in Athens. From a very young age, he had developed a passion for the profession of the Private Investigator. Thirty years ago, despite having decided to study Business Administration, he entered (by chance) the field he greatly admired, that of Private Investigation.

He felt luck was on his side since he was given the opportunity to get acquainted and trained by some of the best Private Investigators of the time. 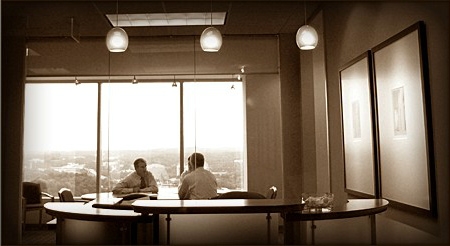 He quickly learned the secrets of the profession and was taught to successfully apply the correct strategy for direct results, taking always into account safety, privacy and absolute confidentiality. Soon after he joined and devoted himself to the profession he is still so much fascinated with.

In 1991, he founded his first agency as a private investigator, being the youngest Licensed Private Investigator in service. Within the next decades, four agencies in total were founded at key locations in the Attica Region.

His first Private Investigation Agency located at 100 Aiolou & Stadiou Street, in the centre of Athens, is still after almost 30 years the headquarters of his business activities.

In the years that followed, Kostas Sotiropoulos specialized and was additionally trained on collecting, organizing and using documented evidence in cases of Criminal Law and particularly in:

As a Private Investigator he has successfully coordinated numerous investigations throughout Greece and abroad.
He specializes in adolescent counseling, in particular drug and internet addiction.
He is a certificate holder in “Counseling on Dependence – Teenagers and Drugs” from the National and Kapodistrian University of Athens while currently he is studying Criminal Psychology and soon will obtain the relevant certificate
He continues his studies in the Humanities Department of the Hellenic Open University attending the course of Studies in European Civilization. Υν
In terms of best practices, ongoing training adds to his competence as he constantly keeps abreast of new developments especially on strategies related to preventing and combating drug abuse. In addition, he attends lectures and gets updated on the latest international news on Child Safety and Protection from Online Dangers.

Currently, he is in the process of creating a group of experts on child protection regarding the following issues:

Safe and Correct use of the Internet by minors
Treatment and Prevention of Substance Addiction.
Being sensitive to the challenges of modern life, Kostas Sotiropoulos also participates in voluntary actions on the rehabilitation and integration of these vulnerable groups. Furthermore, he provides his services as a permanent associate in the Non-Profit Organization (NGO) Roots Research Centre for reuniting lost relatives.

In his everyday life, he is devoted to the upbringing of his child and sport. He is a music lover and in his spare time, he goes gliding, rock climbing, and hiking while he regularly takes motorcycle tours. He was a champion athlete and he took part in the Greek Under-16 national team at a young age.

“Alexandrini of the Winds”

In a special investigation, in the beginning of his professional career almost 30 years ago, Kostas Sotiropoulos solved an extraordinary case. After having collected and tied together the unique elements of the case, like putting together pieces of a family puzzle, he was the trigger who motivated his client, Alexandrinis’ daughter, to envisage the composition of an exceptional book by a renowned author of the Greek literature, Kostas Boubouris.

“Alexandrini of the Winds”– With the assistance of Kostas Sotiropoulos

“Alexandrini of the Winds” is a literary book which contains real facts discovered by our investigation agency as well as other important historical facts crosschecked by the author concerning Greece during World War II, in particular the year 1941 and the years before and after.

Kostas Boubouris’ literary prowess is evident throughout the book. It is a true story based on documents, which includes rare photos from unique records printed for the first time and material by our national photographer, the late Costas Balafas.

The book is about a prostitute, a heroine, a unique character who until today is the subject of discussions in the gatherings of both older and younger people in the neighbourhoods of Petralona, Thissio and the wider region as well.

Through the rich, pleasant pages of this historical and fictional book faded memories are awoken in some elder readers while the younger ones embark on a journey.

The wonderful, human side of “Alexandrini of the Winds” during the difficult years of the German occupation and her course in life almost until present is exalted though the strong writing skills of the author in a story full of touching moments.

Our agency became the springboard to bringing to light the story of Alexandrini and in collaboration with the multi-talented writer Kostas Boubouris, this brilliant book was published in November 2014 by Filippotis Publications. 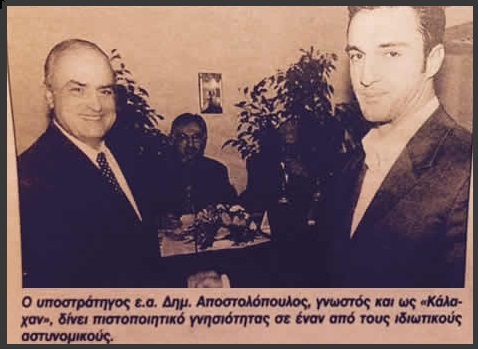 Nearly 30 years ago, Kostas Sotiropoulos receiving both an award and certificate by the Greek Police Major General Dimitrios Apostolopoulos known as (Callahan).

Mr. Kostas Sotiropoulos is highly recognized and gives occasional interviews to the mass media, both on television and radio.

Click on the link to see some of the interviews given by Mr. Kostas Sotiropoulos.

Certificate of the Hellenic Association of Private Investigators
(S.E.N. Founding Member) – License No. 22455/1999

Counseling on Dependence – Teenagers and Drugs

The professionalism of our staff and our associates as well as our expertise in telecommunications, personal computers and generally surveillance and tracking with the aid of cutting-edge technology is the key to our effectiveness.

Reliability, confidentiality, safety, immediacy and trust are what make the collaboration with our clients distinguishable. The results of the cases we have investigated, established us among the largest and most reputable Private Investigation Agencies in Greece.

Our specialization in child and adolescent issues and our ability to undertake cases related to substance abuse (drugs), sexual harassment, school violence, domestic violence and bullying is equally important.

Effective and discreet. Thank you very much.

They do not share what I know because I'm trying to tell him that I manage them for his partner. However, I take responsibility for recommending you unreservedly.(Google translate)

Proven complete and quick results. All through with man, you have become a friend, as if you have been known for years in a well known place ..! (Google translate)

Call us 24h and inform us about the needs, requirements and particularities of the case, you are interested in assigning to us. Be assured that we will do our best to serve you and ensure your full satisfaction in every respect throughout our collaboration.